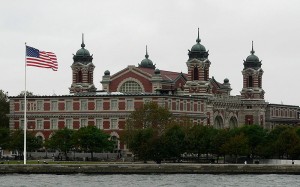 He once took a London journalist on tour and the nickname stuck: Mr. Ellis Island. As a new American, a fascination with the epic station that welcomed 12 million of my predecessors had been kneading my conscience for years; in fact, paying a visit felt almost like something I ought to do. But no matter how much my mind would consider it, my feelings would not comply.

It was this column that led me to Tom Bernardin and his popular slide lecture: Ellis Island – The Golden Door.

“They built America,” he said of the 24 million immigrants that arrived in the United States between 1855 and 1924 both via Castle Garden in Battery Park (later restored to its original name of Castle Clinton) and Ellis Island, the Plymouth Rock of America’s ancestors, as Bernardin calls it.

“They transformed [it] from an agrarian, rural country to the industrial power of all time,” he added with an admiration that dates back to his birthplace in Lawrence a.k.a. “Immigrant City,” Massachusetts.

“They built the Brooklyn Bridge for Christ’s sake!” 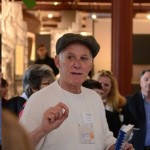 Tom Bernardin during a recent tour for the County Kerry Tourism Board, Ireland.

With more than thirty years in the business, as a park ranger first and a licensed tour guide later, engaging and charismatic in his delivery, it was clear that if anyone was to shepherd me through that momentous threshold, he would be perfect. The Fourth of July was around the corner, and I felt that the nation’s birthday would offer an auspicious opportunity.

On the assigned day, we met at Castle Clinton and were joined by a nice couple from Maryland who had booked Bernardin for a private tour and kindly accepted to have me along.

As we ferried across, our expert, by now in full interpretive historian mode, began to pull out old prints of Manhattan piecing together the early history of the city, leading to the events that would make Ellis Island an immigration inspection site under federal rule in 1892.

“Immigrants were arriving in such record numbers, and there was so much corruption, that the federal government stepped in,” explained Tom. “The feds decided to move the facility to an island to better protect the immigrants and have greater control of the process.” 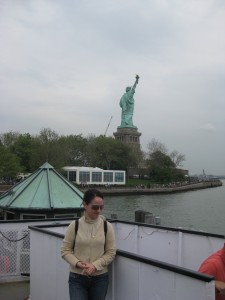 I’m standing on the deck as we approach the first stop at Liberty Island.

I listened while my psyche was trying to make sense of this whole journey: the immediate one to Ellis and the overall one that had landed me in a new life more than two decades earlier. Tom, in the meantime, kept on.

It was at that intersection of tale-weaving, naming our European roots — Italy, Norway, Ireland, France — and rising emotions, as we were advancing to our destination, that it came to me why I had been postponing the trip for so long; like a realization that had been waiting for the appropriate time to make itself known.

My paternal grandmother who raised me was fond of a traditional song inspired by the great Italian emigration. Years later she told me that she had sacrificed one brother, Mariano to France, and his son Ivo to Australia. Neither to be seen again.

The ballad begins with a daughter asking her mother for money to go to America, “mamma, mamma dammi cento 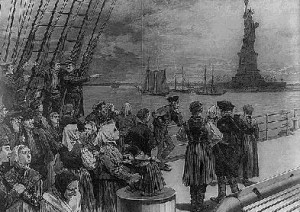 The dark children’s ballad ends with the steamship sinking in the middle of the ocean and the young character tearfully regretting her disregard for her mother’s loving advice. If that’s not enough to tie anyone’s stomach in knots I’m not sure what is, but that was a frequent tune of my early childhood.

It was now obvious, as I sat on a ferry with other people seeking to recompose their history, and Tom documenting how millions of foreigners had come to the United States through the one landmark that has come to symbolize uprooting that, I too, by moving to New York, had disregarded someone’s poignant warning: my grandmother’s. In my emotional brain Ellis Island epitomized that choice.

My revelation was received with a pause, while a soft, understanding gaze emerged in the eyes of my fellow travelers. As for me, after more than 22 years in New York, I had managed to fit into place another piece of my mosaic, and it had happened just in time to disembark.