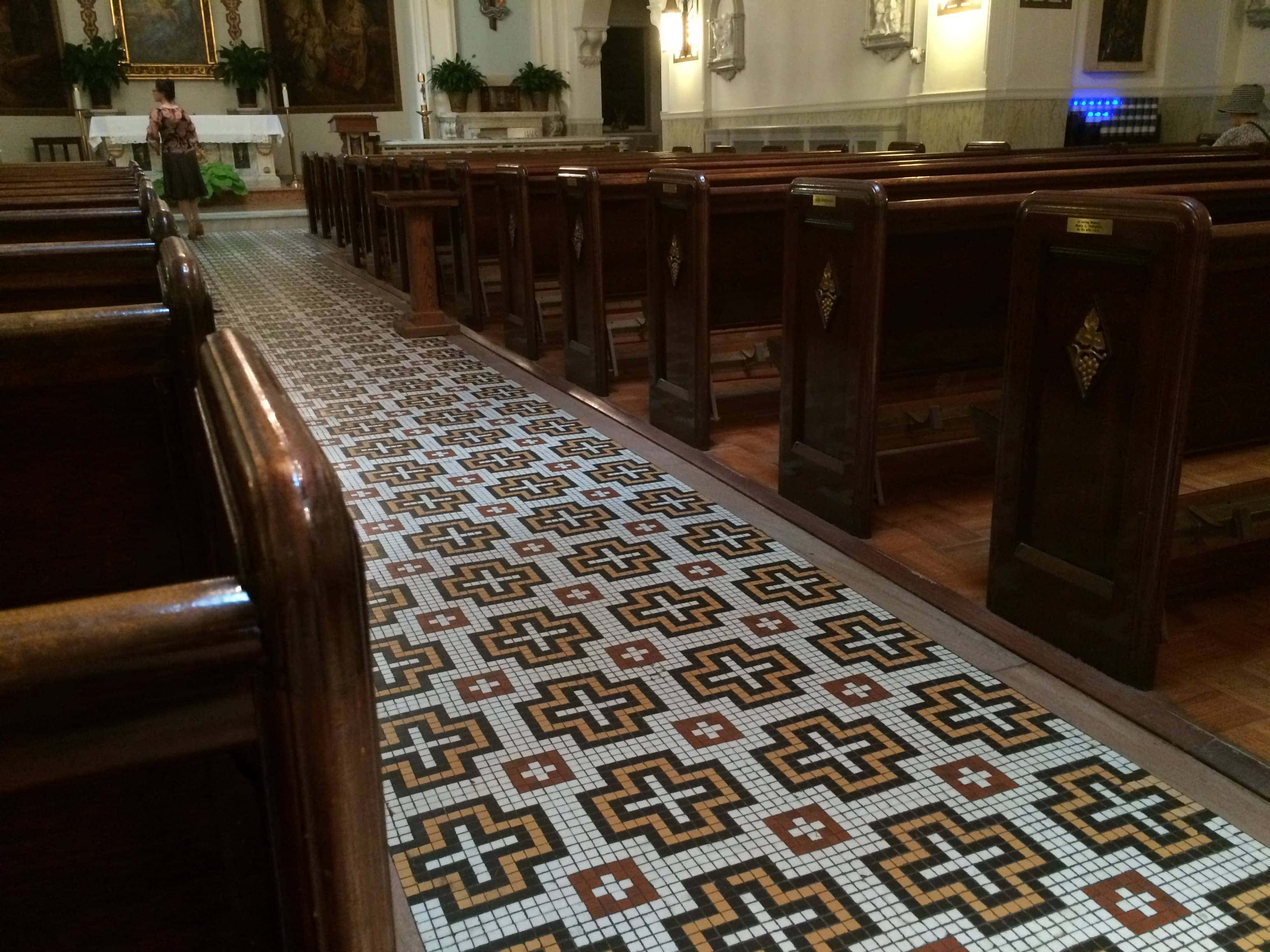 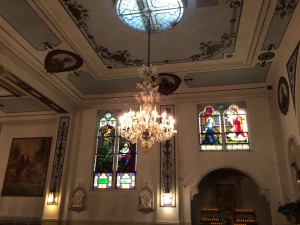 Mosaic crosses of earth and ivory tones run through the floor, grounding the faithful in search of Heaven. The simplicity of pure white and azure pastels rises above, brightened by the shimmer of Venetian chandeliers and painted madonnas. Behind, in the vestibule, the names of the founders are carved on both sides in timeless memory of the segregated community that became family, that became church.

Their sanctuary is now a healing center open to people from around the world.

On August 1, 2015, however, if the merger ordered by the Archdiocese of New York with St. John the Evangelist, 348 E. 55th St., is to take place, the parish that means so much to so many, will be no more.

“It’s going to really hurt,” said Janice Dooner Lynch, a third generation parishioner for whom news of her church no longer holding masses or other sacraments felt akin to a spiritual eviction. 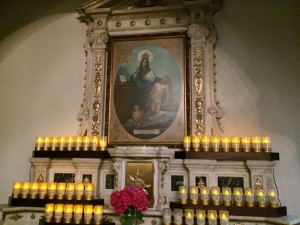 The situation is compounded by the reality that no one at the archdiocese reached out to inform the congregation or listen to their concerns. Instead, said Dooner Lynch, a lawyer who serves as the spokesperson, a request to view the original decree to issue an appeal, now pending at the Vatican, was met with denials and constraints.

“This shouldn’t be happening. As a Catholic, it’s very disappointing.”

“This shouldn’t be happening. As a Catholic, it’s very disappointing.”

She’s not alone. Ceres Ojeda, a Filipino-American who, with husband Jose, has led a well known charismatic prayer group at the church since 1993, is equally dismayed.

“Part of you is being taken away,” she said with a heavy heart. “This has been a second home to us. For many people.”

Lennix Lewis, co-chair of the Archdiocesan Service Team of Catholic Charismatics, added that Our Lady of Peace is a community that allows “faith to be shared and developed.” 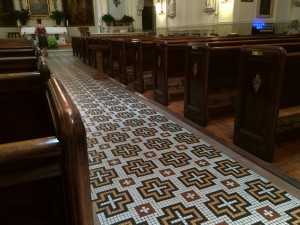 “That’s why so many flock to [this church],” he said. Patients and medical personnel from Sloan-Kettering, local employees seeking respite from their daily toils, and people who come from abroad to be helped by Our Lady of Peace are all part of the faithful.

“We have witnessed so many healings, both physical and emotional.”

As the deadline approaches, the group has been making arrangements to migrate, literally, to the church of St. Jean Baptiste, on East 76th Street.

The initiative is part of Making All Things New, a pastoral reorganization plan launched by the New York Archdiocese last fall, the largest to date, that will affect 112 churches from Staten Island to Ulster County. The intent is to better minister to the needs of the Catholic community and optimize resources, but many among displeased churchgoers feel that the move is inconsiderate, when not totally unfounded.

None of the conditions routinely offered for the closures apply to Our Lady of Peace, said the lawyer. Especially poor attendance and tight finances.

Our church “doesn’t cost the archdiocese a red dime.” Even the salary of Father Bartholomew Daly, their pastor, is accounted for and covered by his own order, the Mill-Hill Missionaries.

“This is a very vibrant parish, with people excited to come here. They love it!”

To prove her point, she mentioned the massive network of support that the parish has quickly been able to mobilize. 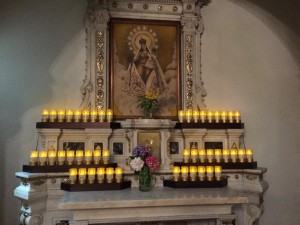 From the “mass mob” that showed up on Founders’ Day, the centennial celebration held on April 26 due to the church’s new endangered status, to the charismatic community, to NIAF’s Leadership Council and many other leading Italian heritage organizations.

The sacred site is also a landmark of the Treadwell Farm Historic District, one of the oldest in the city.

“There’s really no reason why the parish should be closed,” continued Dooner Lynch.

A commitment passed through the generations 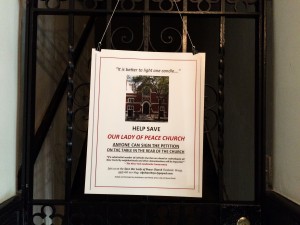 Founded by Sicilian pastor Philip Leone for an early wave of Italian parishioners who needed the comfort of their language and to help each other overcome the hardship of immigration, the church thrives on a tradition of faith-based activism, loyalty and generosity that defies both time and demographics.

Before the founding, they had been forced to worship in the basement of other churches, to avoid upsetting the locals with their presence. Their message of survival and kinship is imprinted in the DNA of Our Lady of Peace, renewed with each generation of parishioners.

For her part, Dooner Lynch is a descendant of Santina and Luigi Guatelli, who arrived from Mazzara del Vallo, Sicily, and Bedonia, Emilia Romagna, respectively. Her bloodline is one of the reasons she has emphatically spearheaded the effort to keep Our Lady of Peace alive.

From their perspective, St. John the Evangelist doesn’t connect with a Catholic family history that borders on reverence. They see it as a sign that the archdiocese is totally missing the point.

From their perspective, St. John the Evangelist doesn’t connect with a Catholic family history that borders on reverence. They see it as a sign that the archdiocese is totally missing the point.

“Why would [we] want to do that?” she asked rhetorically. “With all due respect, St. John the Evangelist looks like a hospital chapel. It’s nothing like this church.”

“There’s no need for it,” repeated Dooner Lynch. “This is just morally and ethically wrong.”

Emotions run deep and questions flare up. Perhaps, wonders the congregation, the end game is to help the archdiocese cover its debts by selling to property developers. St. Patrick’s restoration alone is known to cost millions of dollars.

“They will disappoint a lot of Catholics, here,” said Ceres Ojeda, despondent over the end of her program at Our Lady of Peace.

“I myself, I don’t want to be a catholic. I’m angry, this is family to us. They don’t hear that, and that’s a shame.”

Whether incidentally or fortuitously, Pope Francis will visit New York in the fall, past the September 1 deadline set by the Congregatio Pro Clericis, the Vatican board of appeal that is studying the request to salvage Our Lady of Peace. A reply will come after.

In the end, if everything fails “a lot of people won’t even go to mass anymore,” said Dooner Lynch, echoing a  sentiment that could indicate the creation of a class of spiritual refugees.

“That won’t be me. I’ll go somewhere else, but I won’t feel the same way about the Church. And certainly that feeling will extend to my pocketbook.” 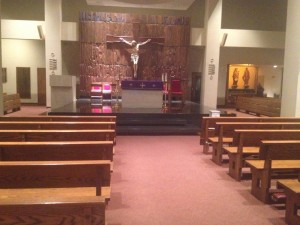 St. John The Evangelist, 348 E. 55th St, is the church that Our Lady of Peace would fold into.
Photo courtesy: Susan Ward.

Articles referenced in the interactive links:

For more information about Our Lady of Peace, 237 E. 62nd. St., and the movement initiated by the congregation to keep their parish open, please send an email to friendsofourladyofpeace@gmail.com or visit the Facebook page.

Comments for: The Loss of a Spiritual Home Triggers Questions of Belonging