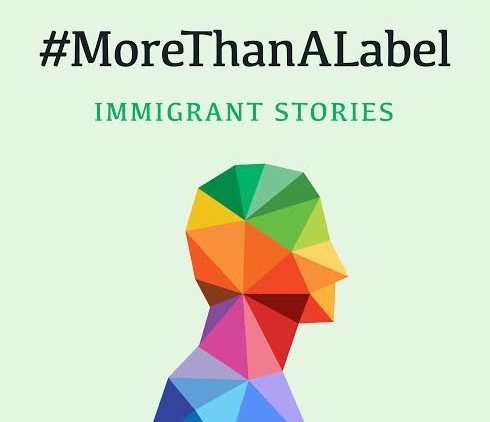 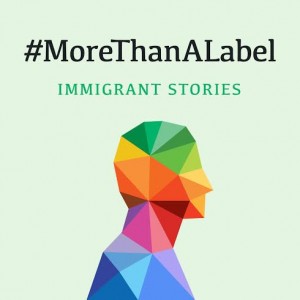 I’m Tiziana Rinaldi, a multimedia journalist and the founder of Life in A New World, a developing media platform for new Americans. Since moving to the U.S. from Italy in 1990, English has been the idiom of my becoming. The faithful companion of a long and incessant transformation that I measured in new words and meanings, as I toyed with the language of my adopted country to both gauge progress and stake new ground.

Slowly and deliberately, the young Italian transplant that I used to be evolved into the Italian and the American woman that I have become.

My new identity is not hyphenated. It’s hybridized; I am fully and simultaneously of both my land of birth and of my embraced nation.

We become outsiders versus insiders, new versus established, isolated versus networked. We become them versus us.

I thank Megan Dottermusch, Community Manager for Social Work at Simmons College, for her gracious invitation to participate in #MoreThanALabel: Immigrant Stories, Simmons College’s online MSW Program’s campaign to promote transcending labels. By participating in this campaign, I will be sharing my story and how I believe we can shatter the stigmas often attributed to immigrant communities.

Striking new roots has never been for the faint of heart, for it requires fraternizing with loss and becoming adept at change. And, let’s face it, people dread both even though they are but constants in life. The more skilled we become at flowing with the ups and downs of our existence, the easier our journey — whether we are newcomers or not.

Within the immigrant experience, however, the intense departure from family, language, culture, and not infrequently, societal and professional status as well, is compounded by the politics of power and belonging.

We become outsiders versus insiders, new versus established, isolated versus networked. We become them versus us.

In this 2007 podcast hosted by relationship expert Dr. Jackie Black, I share anecdotes of my adaptation to describe the emotional impact of uprooting.

Within this context of opposition and exclusion, it’s hard to share the cross-cultural value of immigrants’ personal experiences and adaptive know-how, as they build a new life in the States. Once disenfranchised, the integration process remains private. Shared only with family and friends in a society mired in zero-sum-games and too afraid of the power of diversity.

But the old model is crumbling. Unable to address massive trends of mobility that are narrowing the distances between the people of the world, we are coming face to face with each other.

The 2015 National Immigrant Integration Conference highlighted some of the perils of not seeing the big picture. The U.S. will lose its place at the table of world leaders, said panelists at Making it in America, a plenary session, if we continue to look at immigration not as a resource, but as a problem.

“Forty percent of Fortune 500 companies were started by either an immigrant or their children,” stated Bob Annibale, Global Director of Citi Community Development. He quoted a 2011 report by the Partnership for a New American Economy.

When the conversation shifted to the tech industry, challenges, they said, lay ahead.

“We won’t be able to grow the economy,” said Annibale, “if the country’s shortage of skilled labor is not [compensated] by laws and practices that will mobilize foreign workers.”

Moderator Kathryn Wylde, President and CEO of the Partnership for New York City, offered some data. “The estimate in New York City by 2020,” she said, “is that 27,000 jobs [won’t] be filled [even] if we educate everybody.”

Major losses are already ongoing. Immigrant brain waste, also discussed at the conference, costs the U.S. billions of dollars every year in mismatched jobs that affect not only new Americans’ personal income, but also tax revenues that could fill federal and state coffers. In the meantime, immigrant ingenuity powers Main Street, according to a study released by the Americas Society and the Fiscal Policy Institute in 2015.

In this shifting paradigm, newcomers’ narratives become not only important, but also interpretive of our evolving societies. As our labels slowly but inexorably wear off, the stories of all immigrants — not only the “famous” ones — can and will show us the way.

Let’s become aware of it and be proud.

What follows are fragments of my transplanted life as seen through the lens of searching for a working identity and, ultimately, for a sense of home.

Nancy is a friend of mine, a career coach whose advice I seek when I need clarity. A few years ago we were having lunch at the Museum of Modern Art, in Manhattan, to discuss my idea to develop content for new Americans.

I landed in media within six months of arriving in New York. While I didn’t understand its purpose at the time — I had graduated with a business degree — I liked it and was good at it.

Since then, I held positions in public relations, marketing, television production and journalism with both Italian and American media companies (in one case I worked for a hospital). These jobs reflected my acculturation stage, family circumstances and the level of opportunity that was available to me.

With each one, my main motivation was to be self-sufficient and fully engaged in my new world. So, when Nancy began to talk about “Working Identity,” Herminia Ibarra’s book on the importance of different careers and roles to discover one’s authentic professional self, it suddenly resonated.

Had I unknowingly been searching for my role in this country while working to forge an American life? And how had my status as a newcomer affected the process?

Surely, I had to rely on imagination and a sense of humor to propel me past the obstacles of immigrant hurdles and stereotypes.

I arrived in New York with an MBA from the University of Perugia, and after a short period I began to look for a job.

Soon I collected a gallery of people punctuated by unforgettable characters. Since I was new to the country and not fluent in English yet, Italians came first. A distinguished businessman, who managed the New York office of a government agency headquartered in Rome, provided a taste of what was to come.

After a brief introduction and a glance at my resume, he reassured me that I would “rise to recognition.” By his tone, half-way between paternal and pontifical, I had no doubt that success was around the corner.

His reasoning was simple: the excellence of the Italian school system was such that my education would set me apart. It was only a matter of time.

That said, he suggested getting a job as a “typist.”

A typist? Didn’t he just say that my education would set me apart? Did I hear that correctly? Had I missed something? No, he was serious.

More supportive and appreciative individuals, both Italian and American, encouraged me not to worry. I would find a suitable job, but I should look for an “entry level position,” a new term for me at the time. This was particularly true, since I did need to hone my English language skills.

Then, shortly before I was offered my first job, a head hunter offered some unexpected wisdom. A gaunt man with a leaden complexion and a phlegmy cough, he warned me that I “would always be up for suspicion.”

“Suspicion?” I asked, incredulous. “Sure,” he replied confidently.

American employers, he said, would never reveal it, but always would wonder if behind my accent and my inherent condition as a foreigner, I truuuly possessed the ability to perform as well as a native. I was stunned.

The encounter was so surreal — from the conversation, to his midtown Manhattan office that reeked of cigarettes smoke — it was perversely spectacular.

Yet, I couldn’t hold it against him. Something in his effort to educate me on the harsh reality of the world, however ignorant, felt strangely sincere.

Many years later, when I could put words of experience to that feeling, I believe that what he really wanted to say was “Hey, you seem like a nice girl, but don’t be naive. It’s a tough world out there. You come from another country; you have no family or connections that can get you a job here. People will try to take advantage of you. Don’t take it personally.”

Surely, I had to rely on imagination and a sense of humor to propel me past the obstacles of immigrant hurdles and stereotypes.

The man stirred such determination in me that on that day that I decided to become an American journalist. Not to mention that what he predicted did happen.

Because of his warning, I knew when it was time to move on.

Soon after, I was hired by the U.S. bureau of Il Messaggero, a national Italian newspaper based in Rome.

Although hesitant at first — I couldn’t reconcile my education with my occupational choice — it was at Il Messaggero where I discovered a love of journalism. But advancement there wasn’t an option. I was told so when I asked.

There was no malintent, nor was it up to the staff members at the New York bureau. The issue wasn’t talent or potential. It was about social class and gender, especially in a country like Italy where job allocations hinge on both. No matter how capable and well-educated I was, I still came from a working-class Italian family that could pull no strings for their daughter in New York City.

The issue wasn’t talent or potential. It was about social class and gender, especially in a country like Italy where job allocations hinge on both.

Michael Caine, who rose to fame from a Cockney family in poor South London, put it bluntly to Leslie Sthal on 60 Minutes.

Caine couldn’t find good acting jobs until the movie Zulu, in 1964, when an American director cast him as an “upper class English officer,” wrote CBS News. Here’s the brief exchange with Stahl.

Michael Caine: The luck of it was that the director was an American. Because no English director would’ve cast me as an officer, I promise you. Not one.

Lesley Stahl: Because you were a Cockney?

Michael Caine: Because I was a Cockney.

As for me, I still got to work with three of the most well respected Italian correspondents overseas. I was lucky enough to learn from the best and share in their deep respect for the craft of journalism.

As my command of the English language increased and so did my comfort in a new culture, I knew I needed to look elsewhere for growth.

“Don’t beat yourself up,” suggested a colleague who had had his share of transplanted Italian politics at RAI (Radio Televisione Italiana), where I also worked. (The New York office closed amid controversy in 2012)

“You’re in America now. Who needs to put up with this?”

He was right, and I eventually worked for such leading media companies as ABC News and News Corporation. I’m now an independent journalist and a producer with a few awards to my credit. The deeper my new roots, the greater the eagerness to expand my boundaries.

My new American journey continues on.