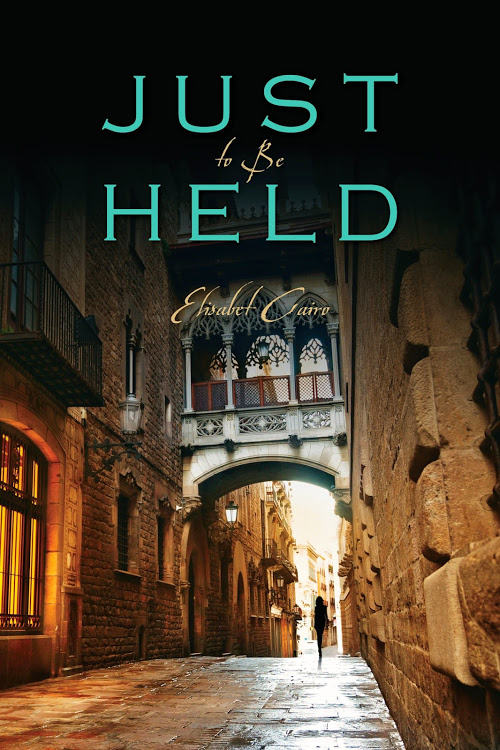 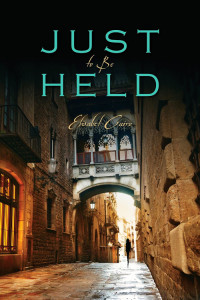 Did you ever wish to leave it all behind? The daily doldrums, a job that depletes your spirit or an unhappy relationship that should have ended years ago. And what about those stereotypes of happy endings imposed by consumerism, religious beliefs or pop culture? As if you had no right to define your own. If you are in a rut, and especially if you are a woman looking for an ally, Elisabet Cairo wrote Just To Be Held for you.

You will like the way Caroline Lettieri, the protagonist, turns on her heels, one day, and moves to Europe.

Tired of a thriving material life on the outside and an impoverished one on the inside, Caroline summons what remains of her strength and flies to Spain, suddenly, leaving her New York career and lame marriage.

“I’ll take a one way-ticket to Málaga,” she says to the young woman at the JFK counter of Continental Airlines.

Staged in Barcelona, where Cairo lived for several years, the novel is a tale of self-discovery in a new land that changes Caroline’s life. It happens through the powerful, if unlikely, bond with Maite an isolated Catalan widow whose religious upbringing frames her dependency from men.

Passionate and poignant, Just to Be Held is no Hollywood style travelogue where the protagonists sample the countries and cultures that they traverse, but a deeply lived observation of the role of women around the world, their materialistic societies, and the fairy tales that trap them in Neverland.

Cairo’s journey across cultures to see what can we learn to open our minds and hearts is a worthy read.  What follows is the edited version of our conversation.

What made you write a book about women who seek liberation through men? 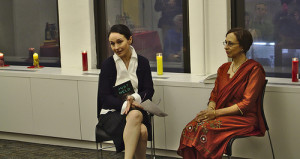 I’m introducing Elisabet Cairo at the book launch of “Just to Be Held,” in New York City.

Throughout my adulthood, I met women that believed their only hope to prosper in life is through a man.  To some degree, due to culture, this can be the case.

The women who inspired me to write this novel come from all socio-economic backgrounds and have the ability to make their own way through life.  We live in a time when there are many educated women so why, I wondered, are they still looking for meaning through men? I watched women in public life or on dating sites and I reached a point where I felt embarrassed to be a woman. I had to find out why women make bad choices.

On the other hand, I was raised in a family where I was taught to seek fulfillment through a man. I rebelled.  Why? I also had to research that.

Were you surprised to see women outside the US do the same?

Very surprised! I had imagined that in countries with a higher quality of life than the U.S. I would see liberated women, perhaps married, but in a relationship of equality. The damsel in distress, the attitude that a woman needs a man, a guide, a leader, was something I did not expect.

I was surprised, however, to see secure and confident women on an equal footing with their mate in Muslim countries. In America we only hear about suppressed Muslim women. The media presents them as if they are the norm, but the Muslim women I met felt that I was the disadvantaged one. My findings are in Just to Be Held.

Did you come to a conclusion why are so many women still affected by the Cinderella complex?

Absolutely, but I will let my readers discover the reason!

What’s Caroline’s, the protagonist, clue to finding her self-made happiness?

There are several factors, I will tell you a few. One: when Caroline moves to Spain she experiences isolation because she cannot speak the language. She is forced to be her own friend, confidant, and advisor.  Two: when she goes from a being well-paid finance executive in the US, to working for exploitation wages in Barcelona, she must approach life less materialistically.  Three: the experiences of the people she befriends—Maite, Antonio, Paco and Nazeem—play important roles in Caroline’s life and self-revelation.

Her two best friends bluntly tell her that the materialistic society she comes from has distorted her values. She tries to defend her views, but time reveals that her friends are correct and helps Caroline understand what makes a person truly happy.

Most people cannot follow in Caroline’s footsteps and abandon their jobs and family to search for happiness. I have written this book so that her lessons, painfully learned, can benefit the readers.

Religion plays a powerful role in “Just to Be Held.” What is its role in your life? 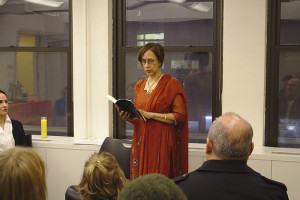 Elisabet Cairo reads a chapter of “Just to Be Held” during her book launch, at the National Writers Union, New York CIty.

Religion has always been a major part of my life.  My mother became a Jehovah’s Witness a few years before I was born. It was her salve for the bruises inflicted by her poor choices in life. This religion controlled every part of my life and my time. We met five times a week, had to prepare for those meetings, and spend weekends preaching.

I was thirteen when I had my first major conflict. I refused to accept that Eve was inferior to Adam. I had a problem with the portrayal of women in the Bible. I believed that God existed, and studied the Bible in depth, but there was always something gnawing at me that made me inwardly not submit. Religion was the reason things were denied to me that would have made me the independent woman I desired to be. I am still trying to catch up.

One of the discoveries I made while researching Just to Be Held is that all religions affect how women are treated and viewed in societies, and how they view themselves.

True, religion has been cast aside by many cultures and some women are atheist, however, their lives are still affected by it.  You can find more on my website ElisabetCairo.com.

In Just to Be Held, Caroline and Maite were both raised Christians.  As children they were introduced to the women in the Bible and learned the role God supposedly laid out for them. After Maite’s husband dies, she marries the first man that pays attention to her because she thinks she wasn’t created to be single.  So, we follow Caroline as she loses faith in God and organized religion for various reasons. 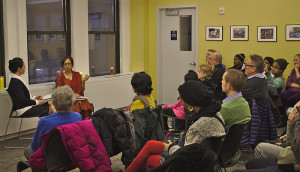 What do you hope that the readers will take away from your novel?

Don’t be afraid to halt and look inside. Ask yourself, am I really happy or am I happy by society’s definition? If I die tomorrow, will I have regrets and what will they be?  Do not let fear of the unknown keep you under a dark cloud. It is lamentable that women are more likely than men to do so.

It is also important that one be open-minded, because your happiness may not be where you think it is, as shown by Caroline’s life.  And learn about our history as well. Maite was not alive during the Spanish Civil War, nonetheless, the war shaped her views.

When I moved to Catalunya, the dark serious nature of the people confused me. After forming friendships, I realized that to understand the Spaniards I had to read about the civil war. What I discovered is in the book.

I hope readers will also understand the experiences and emotions of immigrants. Caroline is a typical middle-class American who has to live no differently than someone who came across the border from Mexico into America without documents.

How did you choose the title of your book?

I am the youngest in a family of women and I have mentored women for numerous years. I watched the tears and 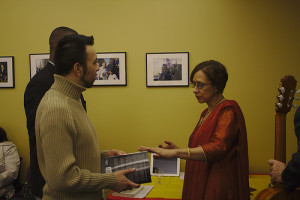 listened to stories of women who were used, abused, and yet still hang on to the man who caused them pain.

I met women with low paying jobs who struggle to support a man who simply does not want to work. I’ve met women who hold their grief inward and learn to live with their husband’s constant infidelities. I’ve met women who have become drug addicts, pushers, prostitutes and even murderers for the love of a man.  When I suggested to these women that they leave and start a new life as a single woman, I became the object of their anger. I was accused of being cold blooded, a man-hater, lacking understanding, and foolish because I was single.  The man’s behavior was always justified and excused.

In the end, millions of women are afraid to be alone and make sacrifices “just to be held.” On page 309, Caroline says, “Why do women sacrifice logic for love? Are the two not harmonious?”  The novel answers why.

How much of you is in Caroline’s character?

Caroline is based on some of my experiences. However, her views are a composite of what I heard from both the men and women that I interviewed in preparation for the novel.

Many people are unhappy living as automatons for corporations. They have lost hope in religious leaders to make life better and can empathize with Caroline’s frustrations and disillusionment toward life.

Caroline was willing to change her life at any cost.  I sacrificed everything to find a path to fulfillment. It was not easy. There were bruises and tears, but I would do it again.

Elisabet Cairo is a New York based writer, educator and life coach. She has travelled extensively throughout Europe and North Africa. For more about Just to Be Held and Elisabet’s work please visit ElisabetCairo.com

Comments for: “Just to Be Held” – Searching for Meaning in A New Land