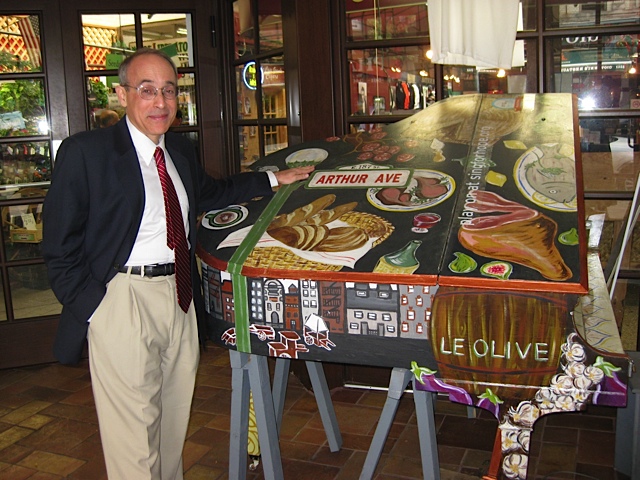 Life in A New World: Interview with Anthony Di Renzo from Tiziana Simona Rinaldi on Vimeo.

Fresh from his book launch of “Trinàcria: A Tale of Bourbon Sicily” Anthony Di Renzo visited the set of Life in a New World for a lively conversation about shattering stereotypes and embracing new perspectives.

He talked about his literary adventure, including the bacterial meningitis that struck him after making incautious character choices, and the real motivation behind the Italian diaspora. What emerged is a fascinating look at Sicily and its tumultuous history.

If indeed the island is the first example of a melting pot attempted by the Western world, what should we, modern citizens of globalized fate, learn from it?

Q. Trinacria is a character novel. Tell us about its protagonists.

The protagonist is Zita Valanguerra Spinelli who lives from 1796 to 1882, which really are the last years of the Ancient Regime, the Bourbon rule of Sicily. She was a transitional figure moving from the feudalism of old Sicily, to the capitalism of the new Sicily.  She is a pivotal person in that passage.
But the novel itself is framed by another story, which is based on Luchino Visconti’s famous shoot of the “Il Gattopardo” (The Leopard), his adaptation of Lampedusa’s novel. So you have a film crew coming to the island during the centennial of Garibaldi’s invasion of Sicily, to make an epic about the past.

And the notion of ‘can you remake the past, can you tell the story of the past’ is central to the novel itself.

The Marchesa, like many aristocrats from that period, is preserved in the Capuchin Catacombs at the West end of Palermo. The [movie] director goes down to the crypt to look at them, who were buried in the clothes of the period, to get ideas for costumes. He comes across Zita’s mummy and he is entranced, mesmerized by her presence.

An imaginary conversation between the two emerges about the past. If really think you can recapture it, you’re wrong!

Q. What’s new in Trinacria about Sicily and the Italian Diaspora?

I think that people still believe that the collapse of the Mezzogiorno (the Italian South), was a natural disaster. It was anything but. It was neither natural, nor inevitable. 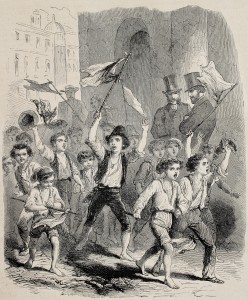 Like the Irish potato famine, which brought the Irish to America, the Sicilian diaspora was caused mostly by political and economic reasons. It wasn’t necessarily because Sicily was poor or backward. Instead, it was because the people who came to supposedly improve it, mismanaged it and caused it to collapse. It was due to bad policies, bad faith and bad economic choices.

To realize that is to see the diaspora in a different light. People did not come to America simply because they were attracted to it, but because their whole world was destroyed. Destroyed partly by the forces that America represented, of progress and industry. By British and American investors having a saying in the new infrastructure in Sicily, and causing its old order to collapse.It was a failure of democracy.

Q. Your novel changes the dialogue about Sicily. What did you want the readers to know?

I wanted to tell the reader that the history of Sicily is emblematic of many ways. What’s interesting to me is that Sicily’s repeated colonizations have much to say about our world today – about our multicultural, global society.

In many ways, Sicily has always been that kind of melting pot, the kind of place in the Mediterranean for those dreams to be worked out. It was conquered by many, many people. They were attracted to it the way people are attracted to the promise of America now.

Since the ancient Greeks, people were attracted to the promise of Sicily as the Western promised land, where you go and you can start over again. So, what went wrong there can go wrong here. It can go wrong in any place where people presume to rebuild nations.

Q. Your change of perspective challenged American publishers. How did you find Guernica Editions, in Toronto?

The story of the Marchesa was actually part of a larger manuscript, and many editors looking at it said that there were two stories: one was Zita’s. So I developed it, and yet no one wanted to publish that story in the US. I sent it to 40 publishers and they all rejected it!

Some would say, “but we already know about Sicily,” or “why would anybody want to know about this?” But my favorite quote was “nobody wants to read about a Sicilian Marchesa, unless she’s written a cook book!”

It was Guernica Editions, a Canadian press, that finally accepted the novel. Their mission is to tell this type of post-colonial, multiethnic stories from different perspectives.

But it also helped that the book came in time for the 150th anniversary of the Italian revolution.

Q. Marchesa Zita Valanguerra Spinelli, the protagonist, wasn’t an immediate casting choice. What happened that brought her back? 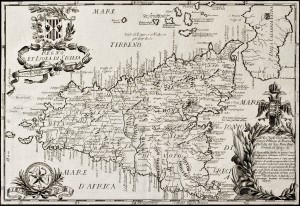 At some point I had decided to eliminate her altogether. She wasn’t going to work, I thought, and I couldn’t market it.

My wife, who’s a student of Jungian psychology and is interested in Greek mythology, said “are you sure you want to do that?” Because the Marchesa is named after Trinacria the ancient name for Sicily, and almost represents the chthonic dark powers. The dark goddess of Sicily.

But as soon as I did it…zap! I contracted meningitis, a terrible, terrible illness, and I felt like I had a jelly fish in my head stinging me. I told my mother and she went “ah, a medusa,” which is the symbol of Trinacria, of Sicily. Then, I knew who it was. The Marchesa must have been displeased with my editorial choice, and I vowed that if I recovered I would give her a story!

After the Marchesa, my favorite character is Benjamin Ingham, her former lover, business partner and frenemy. He’s a Yorkshireman who came to Sicily during the Napoleonic Wars and cornered the fledgeling Marsala market, and made it his own. He was the wealthiest man in the British Empire, at the time worth 30 million pounds. Astonishing!

Yet, unlike many other Englishmen and Americans who came to Sicily to make money, Ingham deeply loved the Sicilian culture. He learned Sicilian, he practiced Sicilian manners, he married into Sicilian aristocracy, he became a Sicilian Baron. He started the Anglican Church in Palermo, but was giving generously to the Catholic Church as well.

So, you see a man, even though a very proud Englishman, who’s honoring the local culture in ways that make him feel he belongs to two worlds and honor both.

Q. How did audiences respond to Zita and her story?

What fascinated me is the reaction on both sides of the Atlantic. Here in America, readers take to this character without hesitation. It surprised me because, in many ways, she’s a proud, arrogant and imperious woman who represents everything that America is supposedly against: privilege, hierarchy, aristocracy, snobbery.

But they love her for her pride and, above all, particularly in the South, for her love of the land, of agriculture, of nature. That’s something that Americans respond to, as well as to her fierce independence.

Italians love the book because they don’t see it as a historical novel. They see it almost as an allegory of Italy in the present. Still split, in many ways, 150 years after the  Risorgimento, between North and South. Unable to have a flourishing economy, at the mercy of outside investors who don’t always honor the native culture.

The reaction to the book is more than I could have ever dreamed.

Q. Like the Marchesa, you descend from Spanish nobility, on your maternal side.  How much of your family history is in Trinacria?

The characterizations, the backgrounds about where these people were from in Spain, where they settled and the kind of estates that they had have similarities, but my closest relative, my great grandfather is someone who broke away from that.

Very early on he fell in love with the idea of democracy and progress and moved from Bagheria to Villabate, to start over again. He appears in the novel, he’s a very minor character, and you see him giving supplies to Garibaldi and the Red Shirts when they arrived in town.

Q. When we talked last year during your fund raising campaign, I asked you how do you keep your Italian roots alive. Your reply was, “like any good gardener, I water those roots, but I also know when to graft. We Italians are never more ourselves than we are when among others.”

What did Trinacria do for you as an Italian who lives in America?

I think that the examination of Sicilian culture demonstrates an interesting hybrid of influences (Norman, Arabic, Greek, Spanish, English and American) that contributed to its unique language, cuisine and most of all an architecture that breaks almost every esthetic rule.

Ethnic identity in a global, multicultural world needs to go past the myth of nationalism, which tends to teach us that we’re not a mix of different people from the very beginning.  The nation state, as a political and cultural institution, is almost dead across the world thanks to globalization, new markets and new media. People are at a loss of how to identify themselves and fall back on regional identity in a way that honors very complicated roots.

“Trinàcria: A Tale of Bourbon Sicily” is available at GuernicaEditions.com and Amazon.com