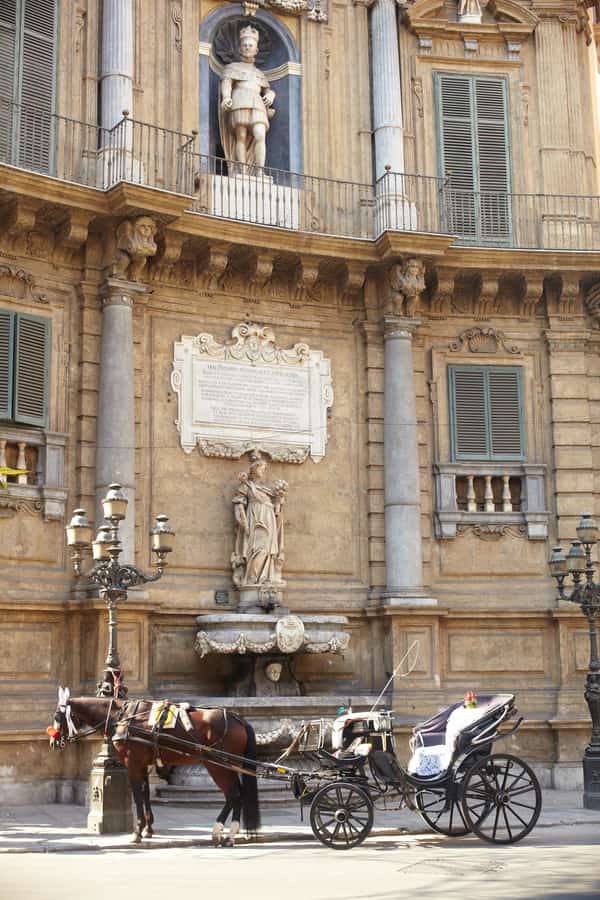 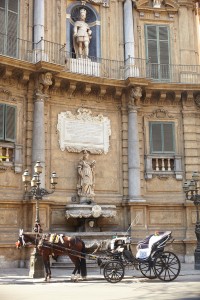 The presentation of Trinàcria: A Tale of Bourbon Sicily and its meaning, both for the book’s historic perspective and its contemporary heritage implications, wouldn’t be complete without a conversation with the author.

In the interview that follows, Anthony, a modern man of old world gentility and new world practicality, shares his thoughts on some of the creative and ideological steps that led to his first novel. (Italic sections were added in collaboration with the author to add further clarity.)

Q: What prompted the desire to write a historic novel about Sicily set during pre Italian unification time?

A: For personal reasons, this period has always fascinated me. My great-grandfather and namesake, Antonio Coffaro, a prominent landowner and agriculturist in Villabate, [my mother’s hometown] supposedly smuggled food and supplies to Garibaldi and his troops in the Conca d’Oro [or Golden Conch, the agricultural valley outside Palermo, Sicily’s capital].

On the eve of the Siege of Palermo (May 26, 1860), Garibaldi and a hand-picked retinue came to Villabate and personally thanked my great-grandfather in the municipal square. Turning to his aide Nino Bixio, Garibaldi proclaimed: “Nino, oggi qui, domani a Palermo.” Today here, tomorrow at Palermo.  It’s a glorious story, and every Villabatesi of my mother’s generation could recite it by heart.  And yet, history books never mention it. If anything, official chronicles insist that Garibaldi never set foot in Villabate, that his troops came down the Mezzagno side of Mount Grifone [south of Palermo]. Were the historians lying or had the entire town made up or colluded in this family story? 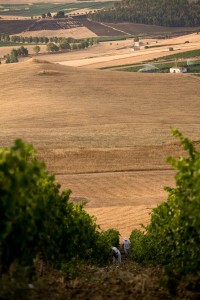 The discrepancy between history and legend, fact and possible fiction fascinated me, and the more I researched the past, the more contradictions I discovered. My great-grandfather passionately supported the Italian Revolution, and yet his family had been minor aristocrats who had lived in Bagheria for five generations before the Sicilian Constitution of 1812 decimated their estates. Garibaldi is glorified as a freedom fighter, but he called himself Duce sixty years before Mussolini, and allied himself with Sicilian landlords. The peasants, who had hoped and fought for immediate relief from their grievous conditions, were disappointed and outraged and revolted in several localities. At Bronte [a municipality northwest of Mount Etna in the province of Catania], Nino Bixio, who had been so gallant at Villabate, massacred the population with two battalions of Red Shirts. This was on August 4, 1860, just ten weeks after Garibaldi had shaken my great-grandfather’s hand.

We Italians are never more ourselves than we are when among others. This is true not only in America but in Italy. Platonic ideals do not form a nation. Human conversation does. 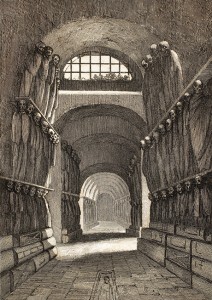 Q: In your novel a Hollywood director stumbles upon Marchesa Spinelli’s mummy, as he researches the story of his movie, and falls under the spell of her epochal story. What did you stumble upon that made you cast the Marchesa as Trinàcria’s central character?

A: Zita Valanguerra Spinelli, Marchesa of Scalea, is based on two actual historical figures: Antonia Vassallo (1774-1815), Princess of Bellaprima and Baroness of San Bartolomeo, the formidable daughter-in-law of the historian Francesco Maria Emanuele e Gaetani, Marquis of Villabianca, whose twenty five-volume Palmeritan Diary remains a classic of Sicilian literature; and Alessandra Spadafora (1778-1851), Duchess of Santa Rosalia, the mistress and common-law wife of the British Marsala tycoon, Benjamin Ingham.

Originally, Donna Zita was a supporting character in After the Fair is Over, an immigrant saga dealing with her great-grandson Attilio Tumeo, who briefly appears in Trinàcria. Ironically, money from his used car dealership pays to preserve the Marchesa’s crypt in the Catacombe dei Cappuccini. Unable to forgive Attilio for accidentally killing her, the old woman’s ghost plays Juno to his Aeneas, thwarting his destiny in America. 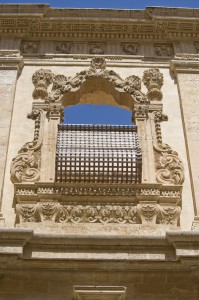 Because Donna Zita’s story complicated and slowed the plot, I removed it from the novel, but this background

material never stopped haunting me. How could I transform it into another book? I had the canvas but lacked a frame and perspective. I found both when I saw Luchino Visconti’s The Leopard again for the first time in many years. The screening triggered a vivid childhood memory.

My mother and I visited Villabate about a year after Visconti had filmed his epic. Many locals had attended the shoot. Some had even worked as extras. Everyone, however, had stories to tell. The most amusing story concerned Ciminna, a mountaintop commune thirty miles southeast of Palermo. Visconti had used the town as Donnafugata, Prince Fabrizio’s ancestral fief. The mayor and the council had petitioned 20th Century Fox to rebuild the sets. Apparently, the American tourists didn’t want to see Ciminna’s authentic Greek ruins, a three-thousand-year-old temple to Demeter. Instead, they wanted to pose in front of Burt Lancaster’s fake palazzo and collect autographs. I had thought this anecdote was a tall tale, until a documentary on the film confirmed it. The irony seemed too perfect to ignore. 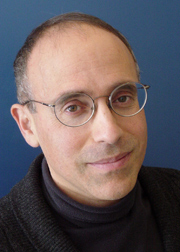 Q: Your Indiegogo campaign explains that you descend from a lineage of noble Spanish settlers in Bagheria, Sicily. How much of your family’s history did you channel, reclaim or just reconnect with, by writing Trinàcria?

A: Family history provided local color and characterization. My mother’s people were less prominent and accomplished than the Valanguerras but much more established. Bureaucrats under the old Spanish Viceroys, they preceded the Bourbon regime and even witnessed the seven-year reign of that clueless popinjay Vittorio Amadeo of Savoy, after the War of Spanish Succession. (“The first Piedmontese invasion,” my uncle Angelo used to call it.) According to family legend, however, they never would have come to Sicily at all if an infatuated hidalgo had not knocked up a lady-in-waiting in Charles II’s court. Exile must have been a blessing, however, given the Spanish king’s creepy character. As the American historians Will and Ariel Durant put it, Charles II was “short, lame, epileptic, senile, and completely bald before 35; he was always on the verge of death, but repeatedly baffled Christendom by continuing to live.”

My ancestors, therefore, never pined for Spain and never succumbed to the same punctilio and pride that characterized the more powerful families in Bagheria. Because of their low profile, therefore, I had to base most of Trinàcria on secondary research. The most useful books were Harold Acton’s delightfully bitchy The Bourbons of Naples (London: Methuen, 1955) and The Last Bourbons of Naples (London: Methuen, 1960) and Raleigh Trevelyan, Princes Under the Volcano (New York: William Morrow, 1973), which chronicles the Ingham-Whitaker business dynasty in Sicily. The latter is as rich and nuanced as any novel. Trevelyan is a descendant of the George Macaulay Trevelyan, who wrote Garibaldi and the Thousand: May 1860 (London: Longmans, 1903), a very Whiggish account of the Expedition of the Thousand. This book, in Treveylan’s own words, reeks of bias, but it perfectly captures the Anglo-American liberal pieties surrounding the Italian Risorgimento. 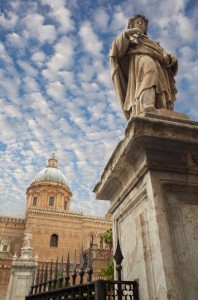 Q: The roots of all Americans come from somewhere else in the world. How important, in your opinion, is ancestry in understanding who we are?

A: Very important, provided we approach ancestry in the right way. By their nature, roots are tangled, so to do full justice to the past, we must recognize its complexity and our own complicity in its often irredeemable tragedies. At all costs, we must prevent ourselves from succumbing to nostalgia, which always kills inquiry and prevents self-reflection. History is not one story but many stories in conflict. By accepting this painful fact, we can inoculate ourselves against chauvinism and xenophobia. Italy’s present immigration crisis, I would argue, partly reflects the county’s inability to acknowledge its own regional divisions.

Q: How do you keep your Italian roots alive?

A: Like any good gardener, I try to water those roots. That means reading the leading newspapers and the latest novels and creative nonfiction. Good roots should produce good flowers, just as good flowers should produce good fruit. Besides, why would anybody trade an idealized picture of the Italian past for the glorious mess of the Italian present? Thank God for journalists like Beppe Severgnini! Last year, President Napolitano made Severgnini a Commendatore of the Order of Merit of the Italian Republic. I would have made him Minister of Culture.

The best gardeners, however, also know when to graft. We Italians are never more ourselves than we are when among others. This is true not only in America but in Italy. If Southern Italians and their descendants truly want to understand themselves, let them understand and welcome the refugees of the new global Diaspora, the new immigrants from Eastern Europe, North Africa, the Middle East, Latin America, and Southeast Asia. We are all Mazzini’s children, but perhaps not in the way that great visionary imagined. Platonic ideals do not form a nation. Human conversation does.