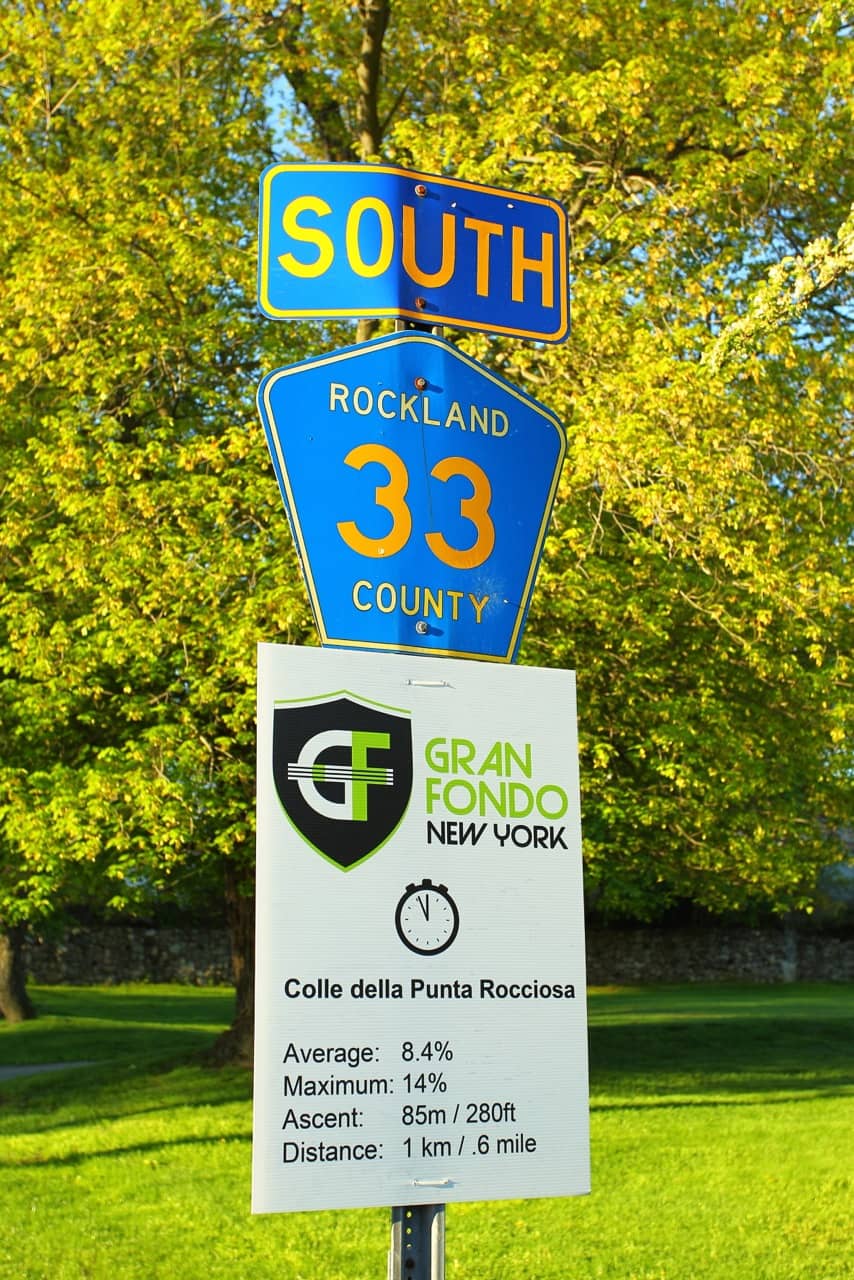 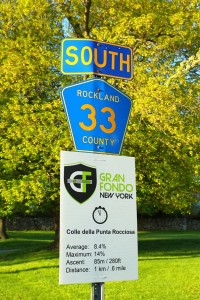 You don’t have to be “il Campionissimo”* to be a winner, my biking grandfather would have said, the reward is in the ride. That’s the spirit of Gran Fondo New York, the high-end cycling competition that brings one of Italy’s quintessential traditions to our great City.

In its second year and already attracting thousands of participants, the event imports the practice of welcoming bike riders of all ages and fitness levels on long, panoramic routes for an adventure energized by challenge and inspiration. To heighten the cross-cultural value of the effort are the two well-travelled, foreign-born visionaries behind it.

“Cycling is Italy,” said Uli Fluhme, the German born CEO of Gran Fondo New York who spearheads the enterprise with wife Lidia, a Pole who grew up in the States. “On Sunday mornings if you go to Como or Firenze, the roads are full of cyclists. They want to give it their best, but they [also] want to enjoy it.”

Fluhme fell in love with the Italian riding culture and granfondo, the national, multitudinous format that encourages conviviality over antagonism, while racing in Italy in the late 1990s.

“Everybody understands what cycling is about, people are part of riding clubs. In other countries it’s not so big.” 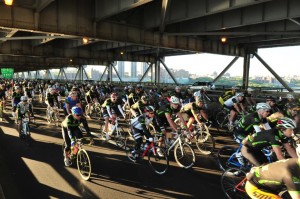 On Sunday, May 20 the couple’s dream to line up at the start both pros and amateurs will pay off when 5,000 participants from over 70 countries will convene on the scenic George Washington Bridge. They will cover a 110-mile course, with four timed climbs, up the country roads of New Jersey to Bear Mountain State Park, before folding back to the Port Imperial Ferry Terminal in Weehawken.  A less demanding 60-mile itinerary, or Medio Fondo, is available for the less experienced.

Prizes will be plentiful totaling over $100,000, with categories that include a King and Queen of the Mountain (determined by the cumulative performance of the climbs), Him+Her and playful ones like Best Vintage Cyclist, Fastest Brooklynite, Largest Team and Oldest Rider/Youngest Rider.

Bike riding is a cultural norm that Italians elevated to a lifestyle. Anyone who could have watched my grandfather take to the dirt roads of Torchiagina d’Assisi, the idyllic country village where he spent all of his life, and leisurely ride for miles under the shade of lilac shrubs and acacia trees, would concur. In modern day Italy, group rides are so popular that, even in my notoriously hilly region of Umbria, organizers offer several itineraries. One is aptly called “Le Strade di San Francesco,” (the roads of St. Francis) after our mystical and world famous native. 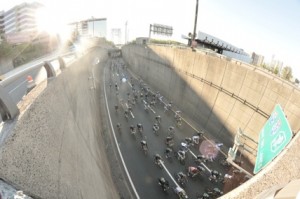 The arrival of Gran Fondo New York signals a change in outlook, a maturation in the community of both cyclists and who we are as multicultural dwellers in a global city.

“In America bike racing and bike touring are separate,” said Fluhme who has lived in countries as diverse as Switzerland, Italy, Ireland and New Zealand. “And it doesn’t have to be.”

Cycling, and especially racing, he added, has always been considered elitist and hard to get into. Being part of a broader event opens racers to the idea that it’s not all about the result.

But it’s the introduction of a modern piece of Italian culture that both expands on the notion of who Italians are and opposes old, unflattering stereotypes, that has earned Uli and Lidia Fluhme the accolades of the Italian-American community.

“I am very proud to welcome such a distinguished event to our city,” said Jim Gennaro, Chairman of the Italian-American Caucus and the Environmental Protection Committee of the New York City Council, at a press conference in front of City Hall. 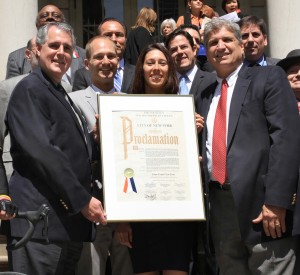 Jim Gennaro (on the left), Chair of the Italian-American Caucus and the Environmental Protection Committee of the New York City Council, honors Ulrich and Lidia Fluhme, next to him, of Gran Fondo New York with a proclamation of the Italian-American Caucus. Council Member Domenic Recchia stands on the right. Immediately behind him are Council Members Peter Vallone and Daniel Garodnick. Heidi Broecking, of Gruppo Sportivo Gran Fondo New York, is shown on the left. Photo Credit: Lorenza Cerbini

“[Gran Fondo New York] is an excellent way to promote appreciation for Italian culture in an unconventional way.” He then stressed both the wellness and green value of the initiative, which kicked-off this year’s Bike Month.

“Italy and America have close ties,” commented Lidia Fluhme, who will be promoting the venture throughout the peninsula this summer, racing in various gran fondos with her husband. “We hope that this [event] continues to foster camaraderie and [further] existing relationships.”

Attending representatives of other Italian-American organizations were just as pleased to welcome a current piece of Italian culture that, for a change, wasn’t about food.

Uli Fluhme credits the alchemy that New York can still produce for their success. “It’s that mix of all cultures and what it brings out [in people]. You get a chance here.”  He said to be grateful for the way he was welcomed, when he moved to New York four years ago.

“That’s what makes New York special,” and possible for a culture that struck roots as deep as the Italian one to yield such potent synergy.

The competition will be preceded by a Bike Expo, on May 18-19, at Penn Plaza Pavilion in New York City, that will serve as the crossroad for both cycling enthusiasts and manufacturers. Pinarello, Campagnolo, Strava, RacerMate and the organizers of the USA Pro Challenge, along with local companies like Rumba Time and Paragon, will be among those in attendance to extend their reach in the international market.

In the meantime, the Gruppo Sportivo Gran Fondo New York, the team of cyclist ambassadors that the Fluhmes created to keep the spirit of their competition alive and spread knowledge of it, will help train all interested participants. Every Sunday, from November through May, the group also offers free rides on the gran fondo course.

For the Fluhmes it couldn’t get better. They hope to see their enterprise grow to include a field professional race at the top of the group and have the “first two stages of Giro D’Italia, in New York,” said the husband.

As other foreign transplants with a vision, willing to channel hard work and perseverance to make it happen, they believe this is still a country with an open mind.

“I can see how, in several other countries, it wouldn’t have been possible for me and Lidia to start a Gran Fondo New York from scratch. To have the opportunity to live here and do the work [we want] is fantastic!”

*”Il Campionissimo,” was the nickname of Fausto Coppi, the iconic Italian cyclist that came to symbolize bike racing in post WWII Italy.

Comments for: Building Dreams and Bridging Cultures, One Gran Fondo at a Time