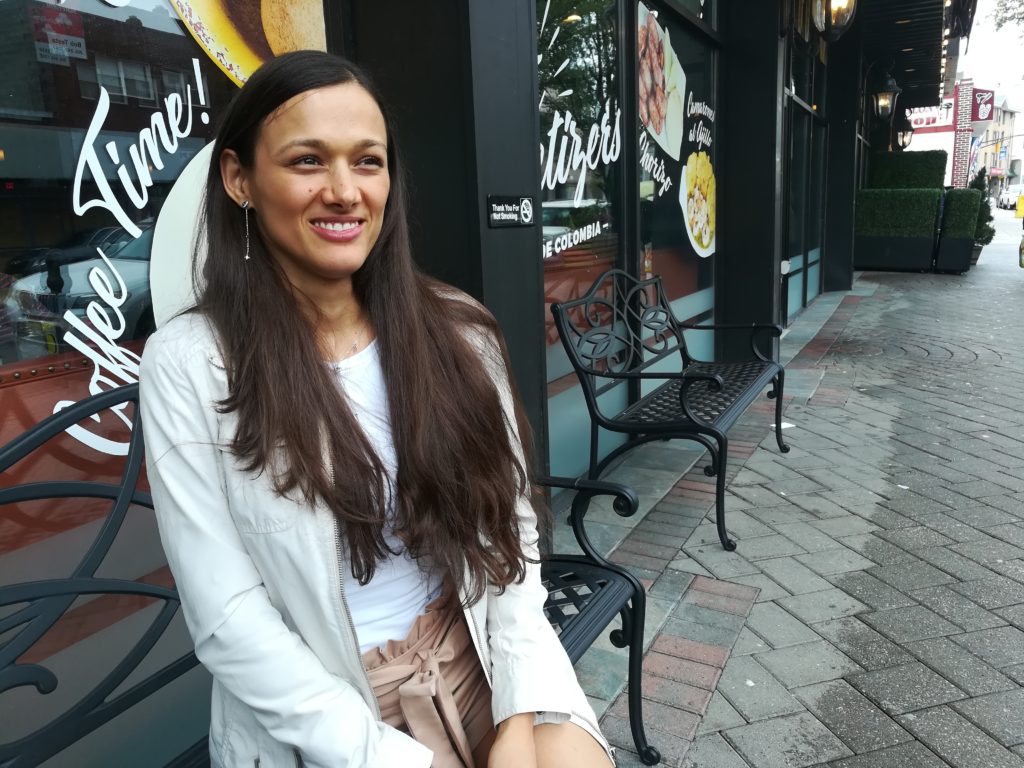 Clara Ochoa has struggled to get a job for many years. Photo by Tiziana Rinaldi

I authored this article as part of my graduate studies at The Craig Newmark Graduate School of Journalism, at CUNY. I met Clara Sofia Ochoa in 2016 while covering immigrant malemployment in New Jersey [2]. Here’s the story of how she immigrated to the U.S. to get a Ph.D. in Pharmacy. Nearly ten years and two advanced degrees later, her quest to regain what she lost remains a defining part of her new life.

I was born into a family of pharmacists and entrepreneurs in Colombia, South America. My father established our pharmacy in Santuario, a small town in the western region of Risaralda, in 1986. As a child, I loved the way he cared for his customers and how grateful they felt about it. It was his devotion, and the joy he derived from his work, that inspired me to follow his path.

In 2005, after years of working at our family’s dispensary, I graduated from UNAD (Universidad National Abierta y a Distancia) with a bachelor’s degree in Pharmaceutical Management. In 2003, before I finished college, I began working for INPEC (Instituto Nacional Penitenciario y Carcelario) a large male penitentiary in Pereira, the regional capital, where I structured the pharmacy and managed controlled medications. In 2008 I was hired by MEDEX, a specialty pharmacy also in Pereira, where I dispensed drugs for rare diseases, such as Lupus or Hemophilia.

I enjoyed my life, my family and the company of many friends. I used to travel around the country and lived in a five-bedroom house, in a gated community, in Pereira. But since my father is an American citizen, I also began to think of continuing my education in the United States. I wanted to learn more about scientific research and how to help people with rare diseases, such as Multiple Sclerosis or Cystic Fibrosis. In 2010, I moved to New Jersey where my mother and my maternal grandmother already lived. The rest of my immediate family remained in Colombia.

But I know I made it sound easy. The truth is that I had my share of difficulties. They are also what makes me grateful for every second of my life. 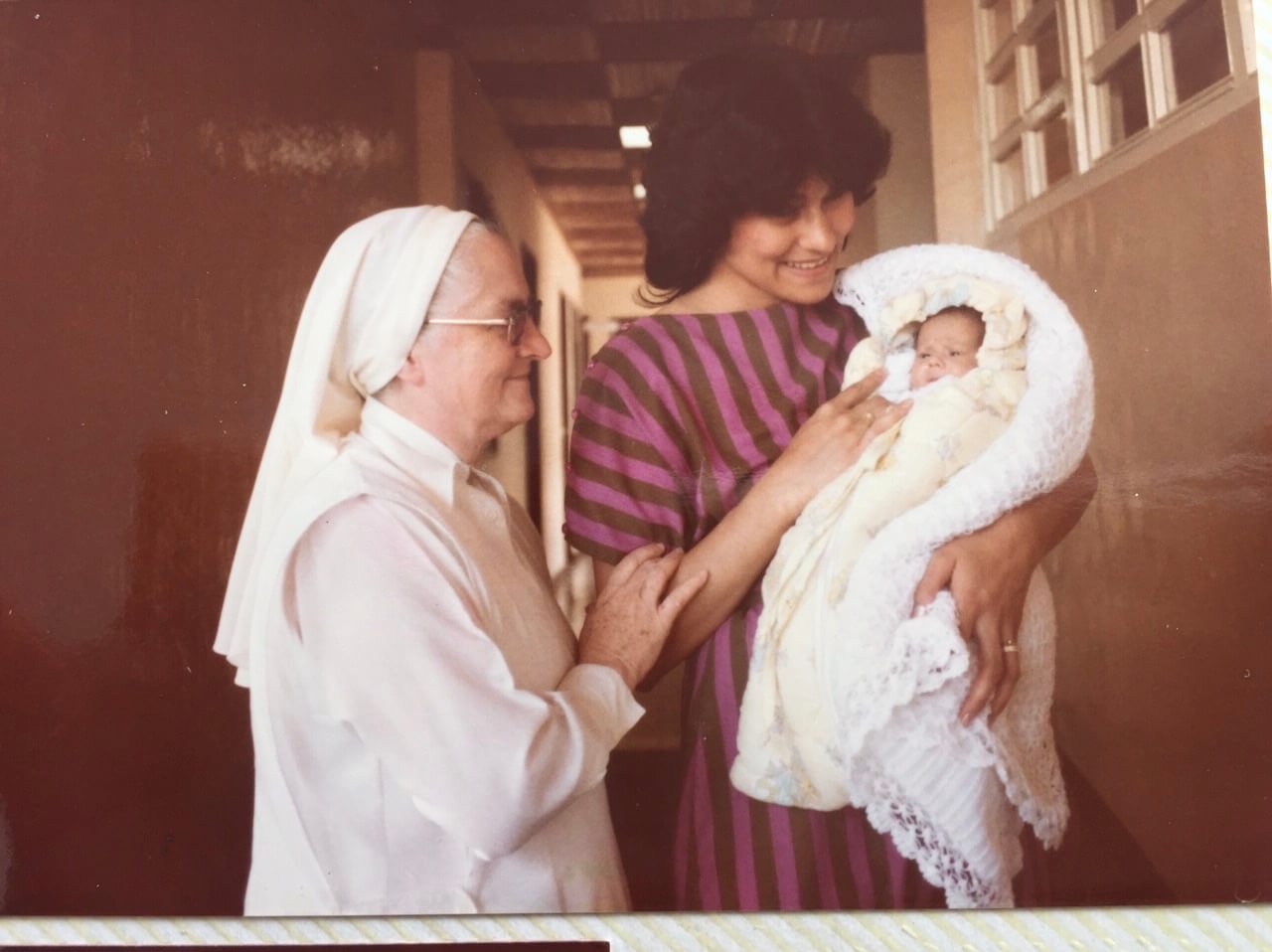 Clara’s mother holds her in her arms the day Clara is released from the hospital where she received neonatal care. Courtesy Clara Ochoa.

I was born prematurely at six months, a fate that left me with hearing, sight, and speech disabilities, as well as some motor impairments.

For 10 years my mother took me to all sorts of specialized medical treatments in Pereira, which is over an hour drive from Santuario. I don’t know how to say how thankful I am that I was able not only to survive but to prevail, despite plenty of disappointments and many sacrifices.

For example, in school, I didn’t have extra time to take tests or assistance to jot down notes, since I needed to look at my teachers and read their lips to understand them. It was so hard to follow the classes. My mother hired private tutors and I applied myself greatly. I graduated both high school and college with honors. I wanted my success to be the payoff for everything my loved ones had done for me. 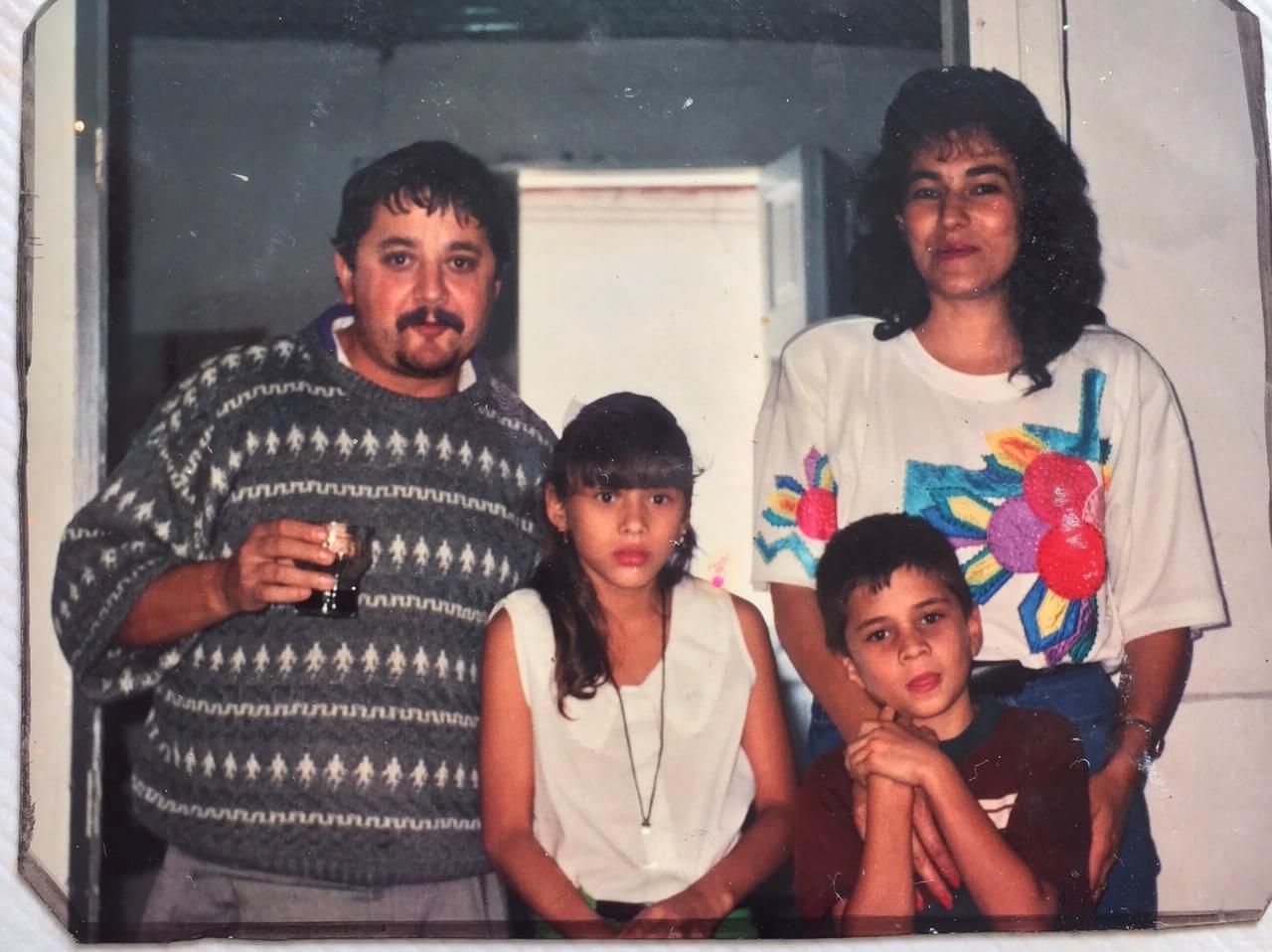 Clara’s father, mother, one of her three brothers pose for a family photo when she was 10-years-old. Photo courtesy Clara Ochoa

So, I’m not much of a complainer. But then, my life in the States can be trying. When I came here, I thought that the education and the professional experience I gained in my home country would lead to a doctorate in pharmacy and a suitable job.

I was eager to learn, but almost ten years later, I haven’t been able to find skilled employment and I clean offices for a living.

I’m part of a small team with my mother and grandmother.

I found barriers in the States that I didn’t know existed and I strive to overcome. I live in an apartment in Hackensack, N.J., near several of my relatives, including aunts and uncles. I love my family; it is the most important thing in my life. But there are days when I miss my homeland.

There, I used to work eight-hour a day in a profession I love. Here, I have to work more than 10 hours a day and on Saturdays to make ends meet.

I hardly have any time left to spend with friends. 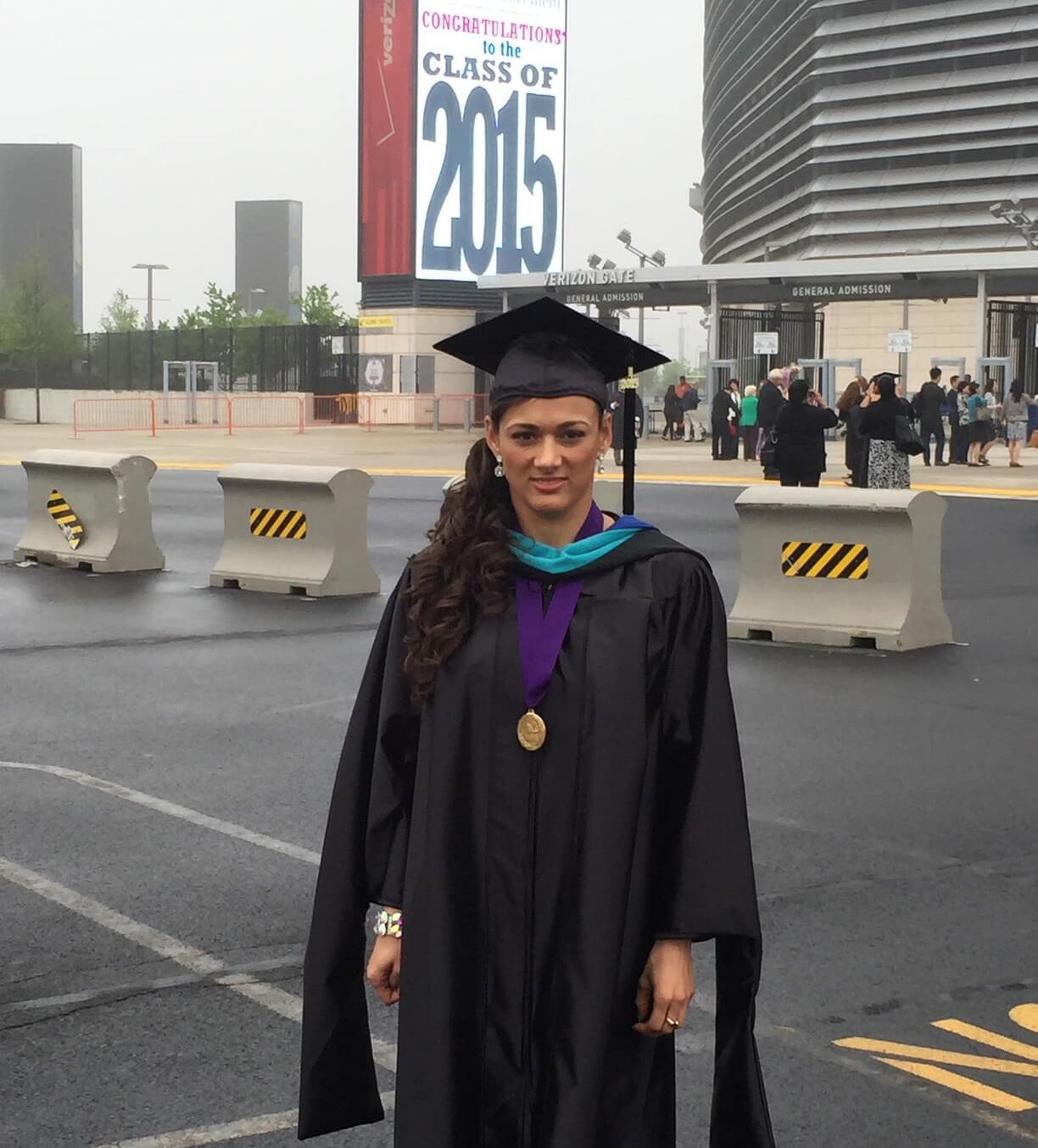 On the day of her master’s graduation. Photo courtesy Clara

I’m constantly adapting to fulfill my dream. Since I came to the U.S. to become a doctor in pharmacy, I earned a Bachelor of Arts in Individualized Studies (BAIS) with a Specialization in Science, with honors, from Fairleigh Dickinson University (FDU), in 2013.

I applied to the same institution for a doctoral program.

But even though I was accepted, I had to deal with the possibility that my hearing disabilities could make it challenging to secure a practicum, which accounted for 30 percent of the curriculum. So, I had to make choices and reroute my career.

It was a hard time. I stayed the course and in 2015 I graduated with a Master’s in Science Administration with certificates in Global Health and Human Services Administration, Non-profit Organizational Development and Global Leadership and Administration, all from FDU. My GPA was 4.0. 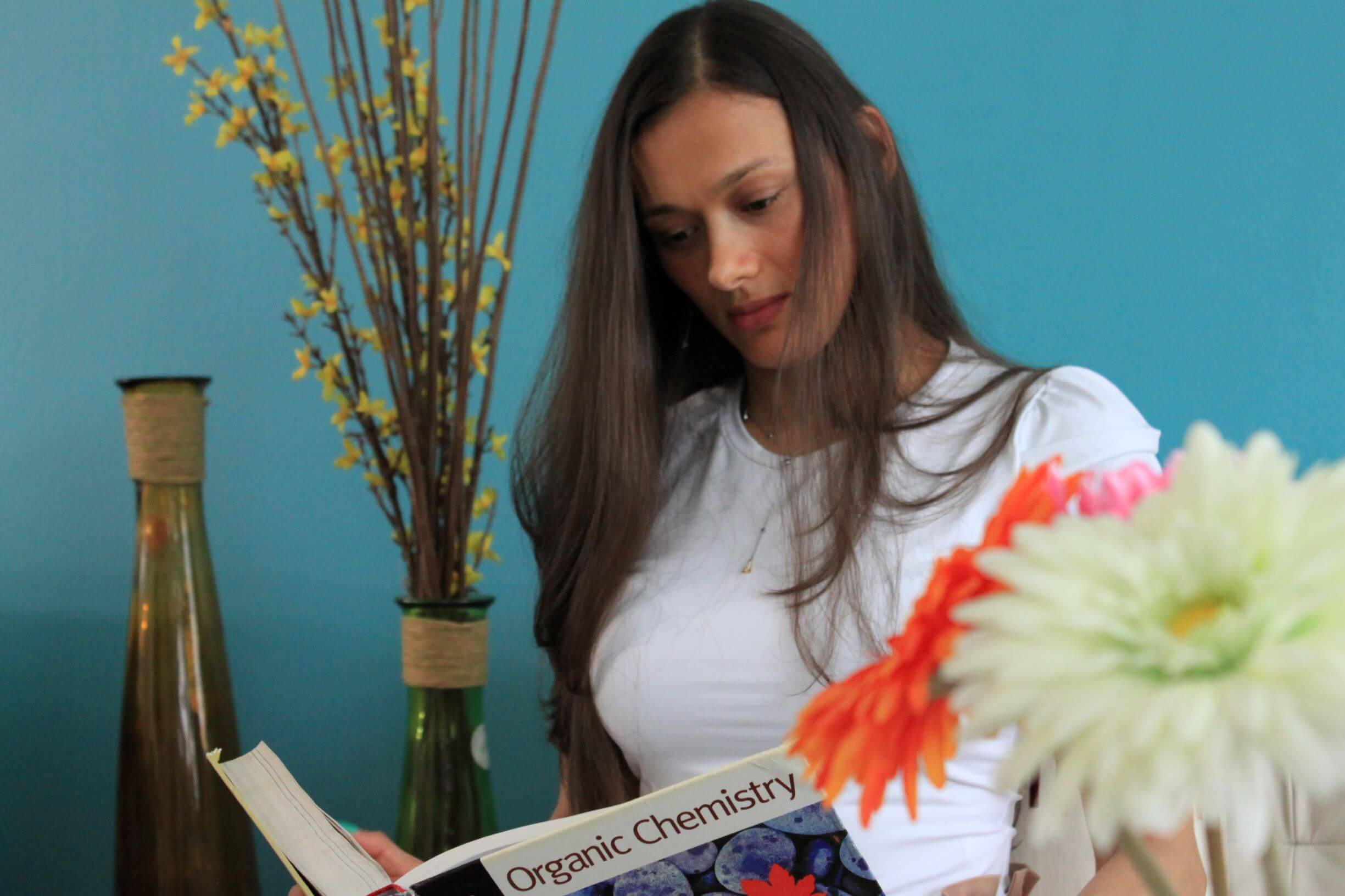 After Clara received a bachelor’s and a master’s degree in the U.S., she still had to work cleaning jobs. Photo by Tiziana Rinaldi

My family was very proud and celebrated each of my graduations with me. My father and brothers came from Colombia for the occasions. I have also worked hard on improving my English pronunciation, which is not as easy for me, through individualized coaching sessions at the Bergenfield Public Library since 2012. I feel very comfortable in my second language. In April 2016 I became a U.S. citizen.

Yet, I still don’t have a full-time job in my field. I’ve been applying for dozens of positions including clinical research, research and development, pharmacology and clinical trial. I had a small opportunity when a specialty, mail-order CVS pharmacy in Fairfield, N.J., hired me as a low-level pharmacy technician in 2017. But there was no opportunity for growth, and I left after six months.

In March 2019, Bergen County hired me as a consultant for two of its Disability Services programs.

I hope it’s a sign of better things to come. I continue to believe that living in the U.S. will eventually yield its reward. I hold on to a vision of continuing my family tradition of caring for others. I will not and cannot give up. That’s the promise I made to myself. 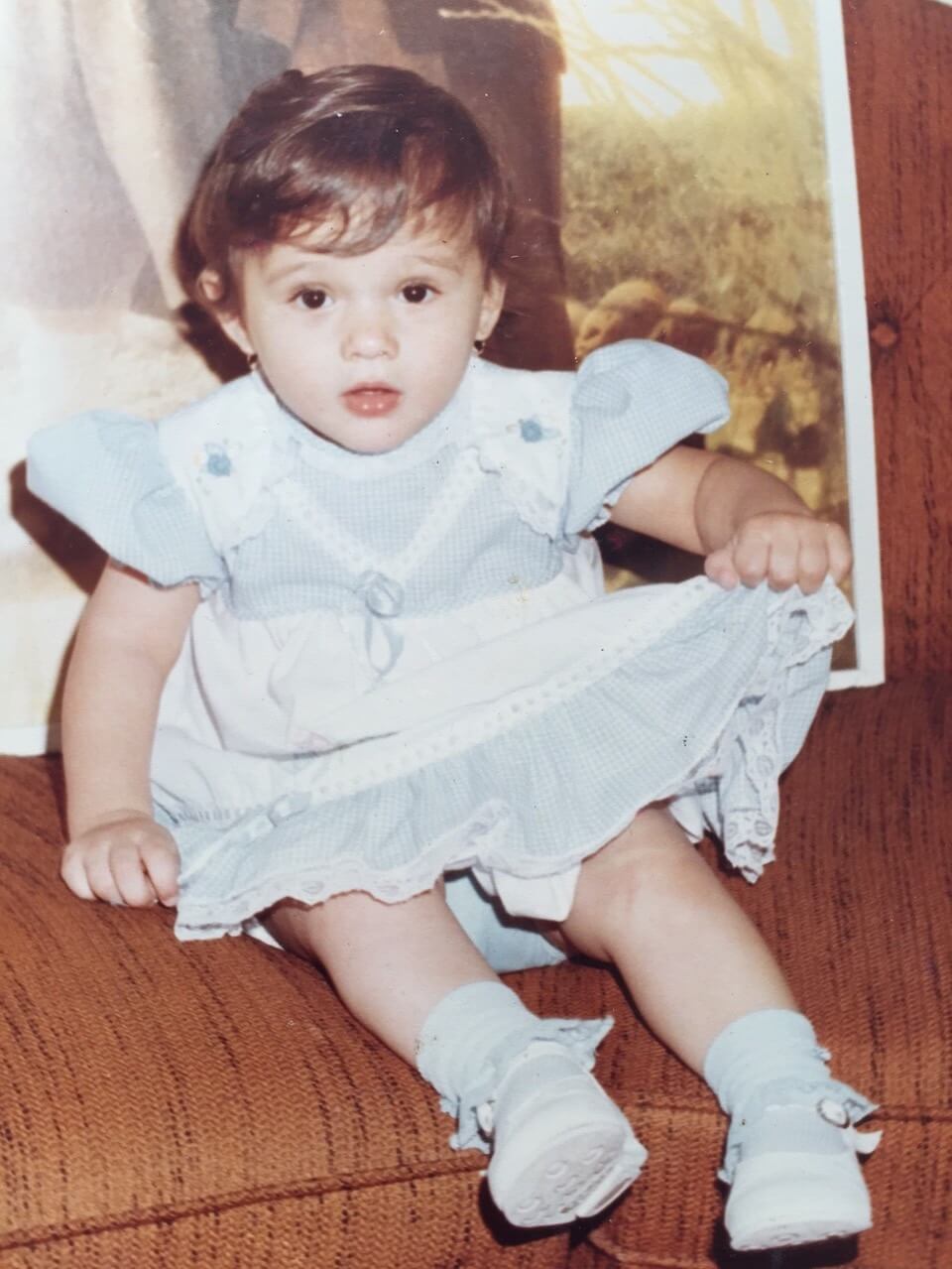 Clara as a toddler at her family home in Santuary, Colombia. Photo courtesy Clara Ochoa 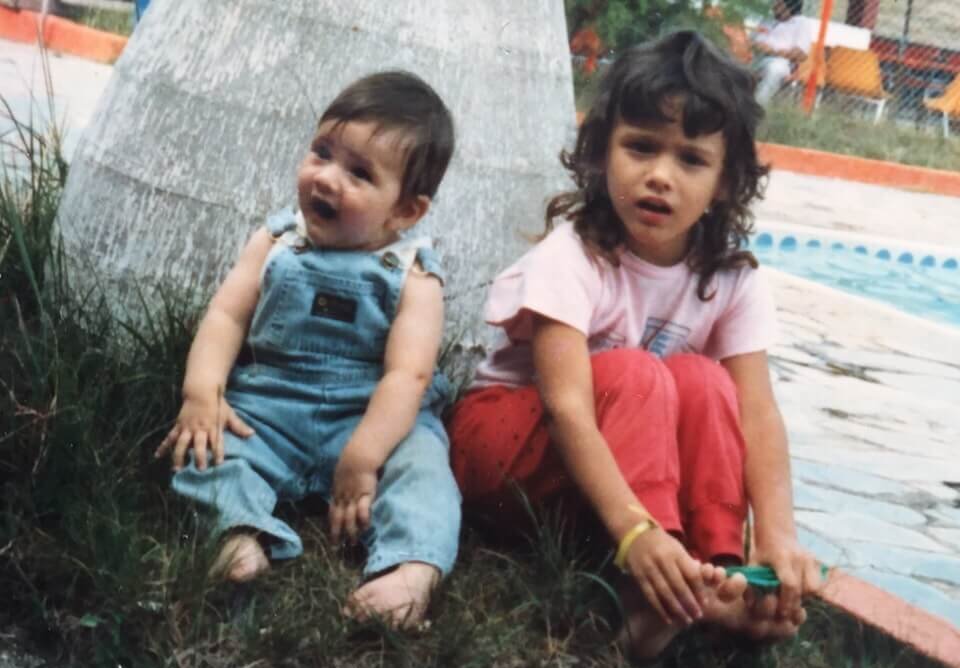 Clara at the home of a younger friend in Colombia. Photo courtesy Clara Ochoa 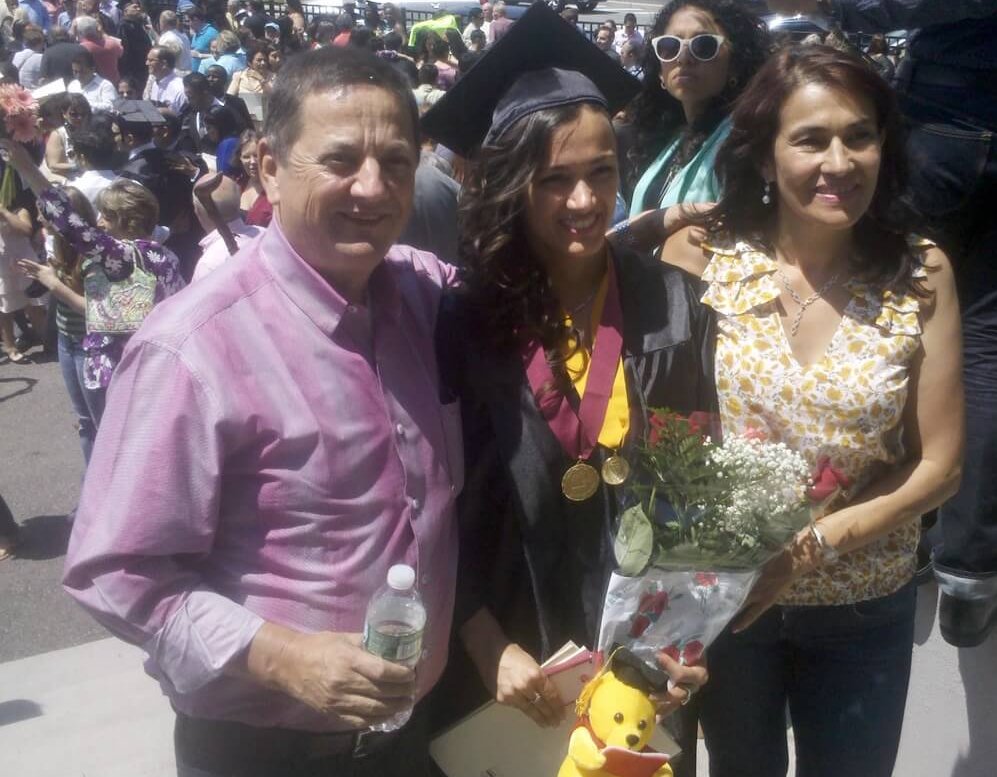 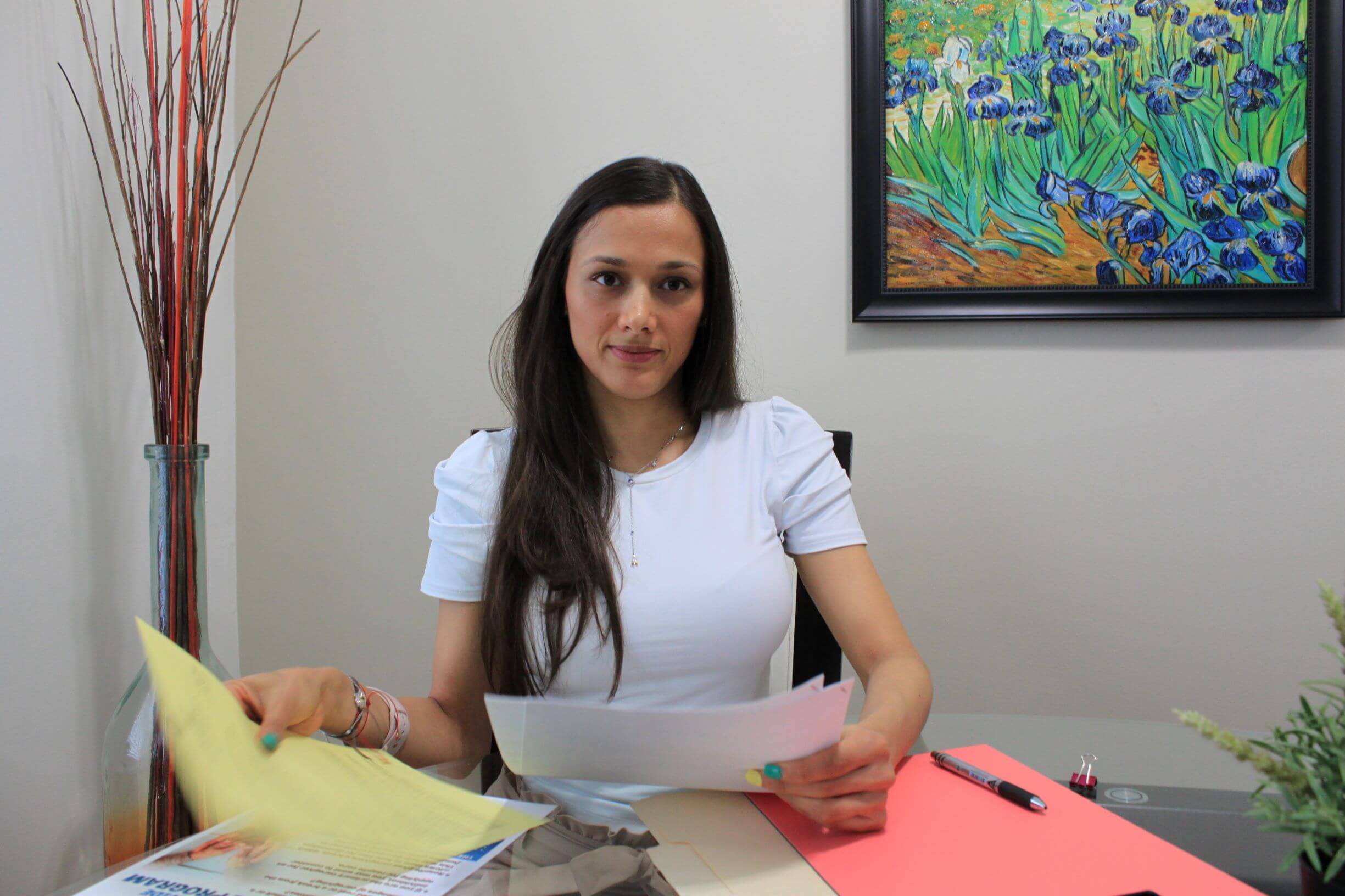