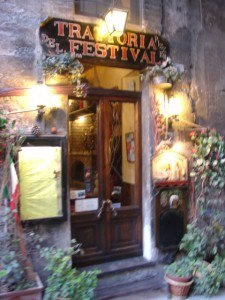 [1](And we complain about Britishisms in New York…)

Like the ubiquitous sneakers that have replaced formal everyday shoes, the low riding pants and the shabby chic that fills Italian boutiques, an increasing number of American-English words have been infiltrating the Italian vocabulary.

Terms such as bestseller, box office, bypass, browser, mouse, hardware, software, call center, day hospital, fast food, gap, mail, leader, gay or trend setter, just to list a few, are so common that they have not only permeated the national lexicon, but have also often replaced the corresponding Italian word.

That’s why the cultural lamentations featured in Americans Are Barmy Over Britishisms [2], by The New York Times, felt so delightfully vindicating. Finally, it’s American-English that falls under the crossfire of foreign vernacular! (Even if mostly British.) Is the world’s interconnectedness producing a case of linguistic cross-pollination, wondered the Times or, as I mischievously prefer, is it a case of payback by contrappasso* (basically, what goes around comes around)?

As a non-native English speaker, I am used to picking up new words and don’t mind if they come from across “The Pond,” as long as they add harmony to the idiom (my brain was trained on a romance language after all). That however, doesn’t mean that I am desensitized to linguistic pride. To the contrary.

“We say ‘email’,” remarks my sister in Umbria if I dare use the word “posta elettronica” instead, when I go visit. These episodes have become more frequent in recent years.

Now, it’s tricky enough to resume a full-fledged native fluency within minutes of arriving home, but to realize that I may have fallen out of touch – like those expatriates who rarely go home – because I make the effort to choose an Italian word over an English one, it’s not simply disheartening. It’s confusing!

Am I in Italy? I feel like snapping. Have we suffered another foreign invasion since I left? 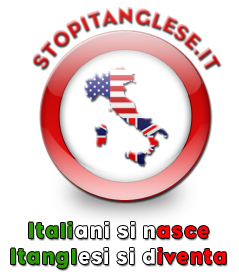 Itanglese or Itangliano [4], as different observers call it, fills not only Italians’ everyday conversations, but the language of the national media as well – homeless [5] has replaced the noun “senza tetto” and red carpet [5] is used for “tappeto rosso,” among the flood of anglicisms – stirring concern over the future of pronunciation, phonetics and the clarity of the news service itself.

Even the legislator is not without fault. I’ve long noticed that the laws that guard the personal privacy of Italian citizens are not referred to as “Legge sulla Privatezza,**” but rather as “*Legge sulla Privacy,” while the authority responsible for enforcing its application is called “Garante Privacy.” (Privacy Defender).

The good news is that while researching this article, I found myself in good company among other Italians, all over the world, who are as taken aback as I am by the unremitting fad.

One, Massimo Arcangeli [6], is an Italian linguist and literary critic who publishes a column at Stopitanglese.it [7], under the slogan “we are born Italian, Itanglese is what we become” (Italiani si nasce, Itanglesi si diventa), hoping to stamp out the obsessive and gratuitous proliferation of borrowed exoticisms.

Others, like Marco Grosso [8] and Paolo Matteucci [8], two young Italian professionals who live in Switzerland and England respectively, but share a common passion for their mother tongue, have adopted a more proactive approach. They created the “Societa’ dei Cruscanti,” a scholarly online forum with an international following that seeks to protect Italian from the pernicious “Morbus Anglicus [9].” 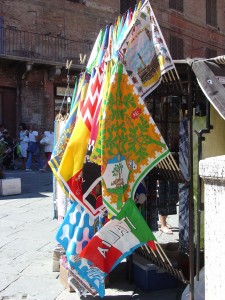 “Italian, we miss you!” screams the headline on their website Achyra.org/forestierismi [11], launched to share a list of translated English terms and encourage press members to scale back the excessive use of “raw foreignisms,” as Grosso and Matteucci label them.

So, American-English idelists take heart. Do understand that, not only a sense of cultural displacement is normal over the sudden surge of local exoticisms – whether British (fortnight, queue, flat [12]), Italian (opera, cappuccino, latte, panino), French (à la carte [13], baguette, au pair) or any other foreign idiom – but also that, in the end, we are all in the same boat.

* Contrappasso is the punishment assigned to the souls in Dante’s Inferno, “The Divine Comedy,” whose castigation was opposite or similar to their sins.